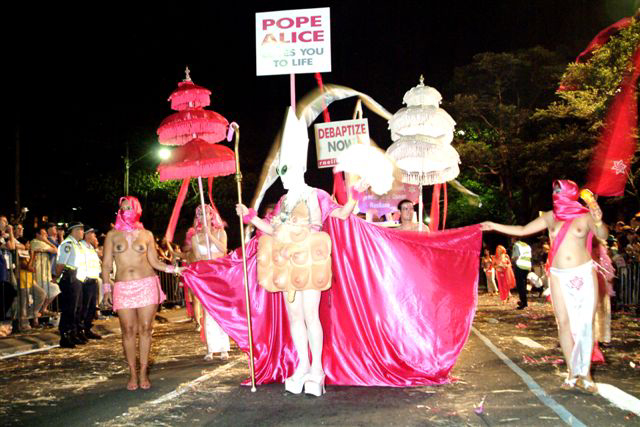 There was a great sense of change in the air this year at the Sydney Gay and Lesbian New Mardi Gras. The crowd kept building along Oxford Street from early in the afternoon. By evening there was close to half a million people at the various vantage points along the Parade route.

For example the cartoons of Mohammed have caused an international reaction. As well as those Same Sex Unions have very much been on the agenda. Congratulations UK. Many other matters concerning Gay Rights have been publicly discussed. Not least of which is the Vatican’s ridiculous edict banning gay men from becoming priests and the ‘witch hunts’ Benedict XVI has unleashed on Catholic Seminaries throughout the world to interrogate seminarians in respect to their sexual preferences.

The Raelian Movement is always thinking ahead in respect to these matters and working towards a better world for all. Oceania prepared a full-frontal assault on the oppressive attitudes of traditional religion and promoted a strong message at this year's Parade following on from the success of last year.

The theme of our float was ‘Debaptism”. “Religions Created Homophobia - Debaptize Now”. Our signs read, “Homosexuality IS Natural. Homophobia is NOT Natural”. “UFO Brings Love”, “The Myth of God is Over”, “Debaptise Yourself”. All signs had the raeliangay.org website underneath.

Our float featured a large cartoon of Pope Benedict XVI, in light of those of Mohammed. (see images).

There has been an even greater reception to the Raelian float this year. It has been a hardwon respect. New Mardi Gras was concerned about our anti-religious theme and wanted to censor our message. We were able to successfully argue that our message is crucial, especially to young gay people, many of whom consider suicide because they can’t see a loving future for themselves in a world full of hateful religious dogma.

Most of the commentators along the route were aware of the Raelians as a UFO and revolutionary Movement. They announced our website, as being especially created for gay, lesbian, bi-sexual, transgender, queer Raelians. The commenatators were aware that we expect to meet with people from another planet. They also congratulated us on taking on religion. One commentator said over the loudspeaker, "Yes how dare religion tell us not to use condoms."

Vanessa Wagner, Sydney drag queen, seemed stunned by Pope Alice’s audacity to have acolytes in Muslim headscarves and bare breasts. Bob Downe, Australian celebrity, was ‘titilated by it all. William Yang filmed us for his extraordinary archive of gay life in Sydney, which stretches back thirty years or more. There were many photographers and we also had our own. Tony Lee, area manager for Sydney, documents most Raelian events in Australia and Alcy Infinity, Raelian extraordinaire also captured us on video. One cameraman was collecting more footage for an upcoming documentary on Pope Alice.

"Pope Alice Loves You to Life" was the message held high behind Her Divine Holiness Pope Alice. Her outfit especially caused a sensation. She led the way wearing a bishop’s mitre and rows of breasts like the Roman goddess Artemis. The large fuschia pink cope billowed in the cooloing breeze of the evening. It was held each side by two Raelian women (Rhanda and Anna) who wore Muslim-style headscarve and little else. Their breast were exposed. This was an awesome and magnificent gesture.

The two women caused an orgasmic enthusiasm in the crowd, who felt liberated by the daring attire and snubbing of religious restrictions. The crowd were thrilled that finally someone was tusing humour in the headscarf dilemma. Many, many people felt that this was such a great way of dealing with the building pressure from Islam to conform to medieval opressions.

Pope Alice added to the joy of the crowd by flashing them, as she did last year, with the huge phallus concealed beneath her cascading breasts.

We were so uplifted by the Parade, which lasted for about two and a half hours up Oxford Street into Flinders Street down to the Sowgrounds. We were buzzing with energy at the end of it. Our float took about an hour to go the length of the Parade route.

This year the big Mardi Gras Party was sold out, which is a good sign that New Mardi Gras is recovering from its lull. Sixteen thousand people bought tickets for the party.

The Raelian contribution of some gutsy politics has also contributed to the revitalisation of this significant event.

Many of the hardcore Mardi Gras goers thought our float was very courageous and highly relevant and topical. They also thought Pope Alice and her assistants were very brave and the costumes witty. This is high praise indeed from a tough section of the Sydney community.

We are lucky nonetheless to live in a country where it is still possible to express oneself freely and to make public comment about primitive and ignorant aspect of outdated religions. It is vitally important to maintain our freedom of expression in the West and not have it eroded. As Our Beloved Prophet Rael says, "We must prevent a return to the Middle Ages".

On the day of the Parade we heard that Rael’s visa to Australia was finally approved. This was fantastic news for us here in Oceania, who were eagerly awaiting the presence of Our Beloved Prophet in our hemisphere for the first time in eight years.