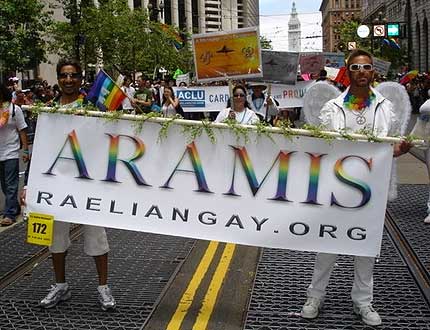 The streets of San Francisco were once again lined with hundreds of thousands of people for the 36th Annual Gay Pride Parade, with "extraordinary energy, diversity, and sense of community," according to San Francisco Mayor Gavin Newsom.

The Pride culminated a week long diffusion campaign with the Fatwa of Love postcards at numerous gay and diverse events, including Opening Ceremony at which I had the privilege to present Mayor Newsom with both a postcard and a flier in which our Beloved Prophet asks that he makes San Francisco an independent gay state and creates the first Gay and Lesbian University.

Many colorful people and equally colorful and exciting activities provided venue for an exciting and powerful week-long diffusion and fun video opportunities showcasing Pride 2006. Eight members of the San Francisco team distributed more than 3000 postcards to a very warm and receptive crowd, many already recognizing the meaning of "fatwa" and still many more appreciating the powerful impact this campaign will have in Iraq and beyond to end hate crimes and crimes against our gay brothers and sisters.

Our Fatwa of Love campaign will continue through October as we find more and more opportunities to share the power of this action and, through it, the magnificence of the Elohim's message promoting love and diversity. Thank you so much dear Beloved Prophet for guiding us in this beautiful revolution. We love you!!!